To finish my novel "My Mother's Feathers", I want to follow the protagonist's route for half a year: I will travel from Barcelona via the south of France, northern Italy and Slovenia to Croatia, do research, get inspiration - and write a lot. This way, I want to finish the first draft by November. In a sincere and absorbing way, I want to tell you the story of Agnes' quest for her mother. It is a European story and the story of a liberation.

I've been working on my first novel for about two years. "My Mother's Feathers" is a European story - so I want to go on a writing trip for half a year, following my protagonist Agnes' route from Barcelona / Catalonia, via the south of France, northern Italy and Slovenia to Croatia. I want to do research on the spot, get inspiration and finally write Agnes' story:

My Mother's Feathers
As a small child, Agnes was abandoned by her mother. Now she is studying and has settled into her small town life in Germany. She's not in touch with her mother and thinks she's over that woman. Only when Agnes is informed that her mother has disappeared, she realizes she doesn't know a thing about that Magdalena Blau who is not only her mother, but also a painter. So Agnes gets her camera and sets out to Paris; she follows her traces to Barcelona and further along the Mediterranean coast. She finds much more than what she was looking for - and realizes that things are not as clear as she had seen them. It is the story of an awakening, a story of longing and liberation.

From May 1st to October 31st, I want to dedicate myself completely to writing. Six hours a day, ten pages a week - for these six months, it will be my fulltime job. This way, I want to grow the "Feathers" from 50 to 250 pages until November.

The idea for this project came to me one evening on the back of a moto in Phnom Penh during rush hour: I was flooded by all the impressions of the Cambodian capital -the noise, the smells, the flying colours-, so much that I felt I could swim in them. In this crazy traffic, suddenly everything seemed possible. I realized two things in Cambodia: I don't need a lot, but I need to write. And: People are so generous.

Along the way, I can stay with twelve different generous hosts for two weeks each. According to the couchsurfing principle, I want to be a good guest: I will help around the house wherever it's needed, I can cook or plant flowers or read the papers to grandma; I eat anything my hosts will eat (another thing I learnt in Asia); I won't ask for much, I just need a quiet spot to sit down and write. During those six months, I want to live inside the story; everything else fades to the background. Thereby, Agnes' story will hopefully become a reality which you can later experience as a reader. Finally, I will revise the first draft and start looking for an editor.

"My Mother's Feathers" is a personal project, but I don't write for myself only. During several public readings, I realized how much other people can take out of my stories. I want to do the same with my novel. I've already dedicated a lot of thought and energy to this story. I wrote the first chapters of the novel as thesis for my degree in Creative Writing; now I just need some time to complete it.

The book is supposed to capture the atmosphere of its places, so that reading it will also become a sensual experience. I want to write about feelings and relationships in a sincere, absorbing and precise way ‒ between mother and daughter, but not only. "My Mother's Feathers" is the story of an artistic awakening. Certainties crumble. I will try to perceive contradictions in characters and also write about what cannot be explained. If this has made you curious and you like to travel while you read, this book might be for you.

Even though I couldn't hold readings for my international supporters like I did in Tübingen, you can get an impression of my writing on my bilingual travel blog "Tales of the Unexpected": www.medium.com/@unexpected

My journey to the novel starts on May 1st. If funding is successful, I can continue the trip further along my protagonist's route and write her story. In order to take this half year off for that purpose, I will need some money each month to cover transport and the inevitable costs of travel life. Thanks to my twelve generous hosts from Catalonia to Dalmatia, I don't have any expenses for accomodation.

Of course, every supporter will be rewarded with exclusive insights into my work-in-progress by e-mail or by post. Not all the "rewards" are available in English, but I will translate the first chapter and some new extracts for my international friends. For now, my project relies on taking what others are willing to offer me; but I really hope that I can soon give something back to many people: to my readers on the one hand (for contributions of 25€ or more in the funding phase, you get the novel at my expense when it's published) - and to children in Cambodia on the other hand. That country has inspired me so much. If I get money for the publication, I will donate 2400€ (the amount I need now) to the Cambodian Organization for Learning and Training, an educational NGO near Phnom Penh.

Writing, travel and film ‒ my world is full of stories. Travel inspires me. Born in 1987, raised on the edge of a mountain in southern Germany, I studied Spanish and English as well as Creative Writing in Tübingen and have worked for an arthouse cinema and film distribution company. I have lived in Dublin, Madrid and Barcelona. So far my travels have brought me to Southeast Asia, North and South America and across Europe. Whenever I get the chance, I travel, and write wherever I am.

I've learnt a lot about the craft of writing in multiple courses at the creative writing school "Studio Literatur und Theater" (Tübingen). I graduated with the Certificate in Literary Writing in 2014. For one of my stories, I was awarded the Studium Professionale Prize; another one was published in the literary magazine ]trash[pool. I've participated in several public readings since 2012.

While working full-time in film, I have developed this novel in the past two years. I wrote the first chapters on Sundays and in my lunchbreaks and did research in Paris and Barcelona. My notebooks, my laptop and especially my head is full of feathers - I see Agnes everywhere. I really need to tell her story now. 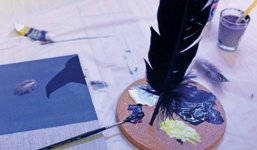