Crowdfunding finished
"Starting a Revolution" is a business book for anybody who believes that a new way of working is possible. We have interviewed some of the world’s most progressive female entrepreneurs and now we want to share with you their radical management approaches and lessons learned. With your support, this book has the potential to turn the world of work on its head.

This will enable us to get the book designed, printed and to market it to even more people.

"Starting a Revolution“ is a business book for revolutionaries. It aims to turn conventional business wisdom on its head and present you with some radical alternatives.

Daily life at startups and companies in today’s world is defined by competition, pressure, and aggression. But it doesn’t have to be that way. Company culture can be founded upon respect, collaboration, trust, purpose and shared growth. We believe that a different kind of startup culture is possible. And we are not alone. Several founders are already experimenting with unconventional approaches to management, demonstrating that a new way of working is possible. It is precisely these management approaches that we explore in this book.

We – that’s Naomi Ryland, co-founder of tbd*, the place to find a job with purpose, and Lisa Jaspers, founder of the fairtrade company FOLKDAYS – each founded our companies five years ago and we are always on the lookout for meaningful business advice. But much of the advice that we hear from the business and startup world, as well as what we read in business books, seems one-sided. Above all we’ve been struggling to find role models who don’t just adapt to the system, but who are genuinely trying to create something new.

Of the top fifty Amazon bestsellers in business and entrepreneurship, only five are written by women. Seeking new perspectives to counter this bias – perspectives from those at the forefront of business – we went in search of an under-represented group in business literature: female entrepreneurs who are creating their own world of work, rather than trying to be successful within established structures and systems.

Over the last year we have interviewed some of the most progressive female founders in the world. What we learned has radically changed how we want to run our own businesses, and now we want to share this vision of the future with you. Covering topics such as organizational development, leadership, recruitment, personal development, team building, innovation and fundraising, this is a hands-on business book for everybody who wants to rethink the world of work.

The women we have spoken to include these and many more:

We believe that together we can start a revolution. And we hope that you will join us.

This book is for anybody who is looking for alternatives to the status quo of business and work – whether you are an entrepreneur, manager or employee. It is particularly relevant for founders and those with management responsibility.

By supporting our crowdfunding campaign – pre-ordering the book or purchasing one of the other rewards – you are enabling us to bring radical theories and ideas about business into the world, making them accessible not only to you but to many others too.

Our funding target will enable us to publish the book that we have been developing together over the past year. With your support we will be able to complete the book and have it edited, designed and printed. We want as many people as possible to read it, so we will need to do some marketing too. We also want to use the power of the crowd to identify yet more inspiring women to interview. Your support will make all of this possible.

I’m Naomi and co-founder and director of tbd*, Germany's leading careers platform for professionals in the social impact sector. Since founding five years ago we have reached over one million people looking for a more meaningful career. I founded tbd* with two wonderful women, Nadia Boegli and Nicole Winchell, both of whom have provided a great deal of inspiration for the book.

I’m Lisa, and I founded the fairtrade Company FOLKDAYS with Kimon Haars. FOLKDAYS works with crafts people from around the world and in the last five years generated an income for hundreds of people, many of them in the most remote areas of this world.

We have been friends for ten years. 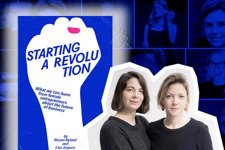