The Greifswald based festival Nordischer Klang is focusing on Nordic music, art and literature. For 2012 the hosting country will be Iceland and we have thus decided to invite the british born concept-artist Kitty Von-Sometime and her Iceland based Weird Girls Project to produce an original work in Greifswald.

The Weird Girls Project (http://www.theweirdgirlsproject.com/) is an ongoing art experiment created and produced by the concept-artist Kitty Von-Sometime and presented in Episodes. Each episode is planned for approximately three months with the participants knowing as little as is possible about the event excluding the date, this includes the concept, location and costumes. As standard there will be a photo shoot and they are aware they will be filmed. The main element of the project is ‘release to the unknown’.

Media is produced from each episode but the project also focuses on the performative character of the event itself and how the women react, improvise and morph within costume learning about their power of self combined with the strength of coming together as a group. The project involves ordinary women rather than professional actresses or models and part of the inspiration was to encourage a gain in self confidence within women, especially focusing around body issues and a release of inhibitions.

So far over a period of four years the project has given birth to 15 Episodes and 3 ‘specials’ which show women of diverse age in costumes while they are moving through the playfully reenvisioned environment, following choreographies or highly symbolic narrative elements of the storyline. A multitude of images of contemporary womanhood and pop cultural references are quoted in the episodes, ranging from Chorus Girls, Horror, SciFi, Bunnies, Gothic to Superheroes. The accompanying music stems from collaborations with Icelandic and international artists and bands (for example Imogen Heap, Ólafur Arnalds, FM Belfast, Gus Gus, Agent Fresco, Emiliana Torrini, Ghostigital, Legend).

The Project itself started in a very naive style with the final media showing little to no experience and it has matured throughout the life of the project. Kitty creates the concept for each event and in addition has directed, designed and edited on varying episodes but always draws in the talents of different photographers, costume makers and film makers to bring the concept to life forming a constantly fluid collaborative.

Greifswald is the hometown of the romantic artist Caspar David Friedrich and many locations in and around Greifswald have become essential parts of the romantic iconography. Kitty Von-Sometime has shown in former episodes of her Weird Girls Project, that she is extraordinarily capable of using her surroundings in order to create astonishing visuals. We want to bring The Weird Girls Project to our town and create a performance with local girls thus contradicting the romantic landscape with the people-based focus of The Weird Girls Project.
The performance and filming will take place in the end of march. Under the official festival in may we will show the first artwork uniquely created for Nordischer Klang in a cooperation of Nordic artists and local people from Greifswald.

For over 20 years the festival Nordischer Klang is made possible by hours of free work and enthusiastic support by students and staff of the University of Greifswald and many other local supporters.
We feel that is is time not only to invite artists to Greifswald but actually initiate the creation of a project where local girls and the town of Greifswald are a decisive factor. Kitty Von-Sometime's approach of making a group of woman venture into the unknown and creating artwork out of this process seemed especially fitting to this aim.
By supporting this project not only do you help us make art in a structurally and financially disadvantaged region of Germany, you also show that awesome and exciting art-projects are possible outside of the big cities of Germany.

We have secured most of the funding through the festivals tight budget and our helpful partners. We are still in need of funding for the production of the costumes. The more funding we can get the more spectacular details and features we will be able to realise regarding the costumes of the participants of Greifswald's Weird Girls episode.
If we achieve more than the 750 € aimed at, we will happily increase the number of women that can participate in the Greifswald episode.

The Greifswald based festival Nordischer Klang is the biggest annual German festival dedicated specifically to Scandinavian/ Nordic music, art and literature. It is organised by the Nordischer Klang team associated to the Nordic Institute of the University of Greifswald.

The Nordischer Klang team has invited several local institutions into the production process: The resulting film will be shown in the local theatre at the opening night of the festival, which is open for everybody. We are also planning a lecture by Kitty Von-Sometime on her creative process and the societal implications of her concept-art in combination with the Greifswald based Krupp Kolleg of Science (http://www.wiko-greifswald.de/en/ias.html) and we are organising a retrospective exhibition of Kitty Von-Sometime's work including photography, film and costumes of past performances in the gallery space of the literature centre Koeppenhaus (http://www.koeppenhaus.de/). 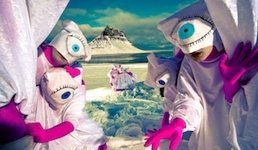