Crowdfunding finished
When after a college party a young drug dealer gets arrested, and a rich drunk frat boy gets involved in a fatal car crash, both of their lives are interwined as they must now confront their families, the law and themselves. VOLLRAUSCH is a short film project, realized as a part of the course "Motion Pictures" at the Darmstadt University of Applied Sciences. With your help we will be able to talk about an important topic which is not addressed enough.

With this value, all basic and necessary costs for our short film can be covered. Every additional Euro helps us to realize the film in the best possible way.

According to German law, a person who has voluntarily gotten drunk, but did not want to commit any criminal offenses before drinking, may be only held liable for the offense of “Vollrausch” and not for the others. Our film is based on a real case in Germany in which a young man ran over and killed a woman, but was only sentenced to pay a fine because of the high levels of alcohol in his blood.

The plot mainly takes place in one night, and tells the story of two characters: Lena and Adam. Lena is a law student and a party drug dealer, trying to financially support herself and her mother in Brazil, while having to deal with an alcoholic father. Adam is a popular and choleric fraternity student, host of alcohol-heavy parties.

After one of those parties Lena gets controlled by the police and arrested. Adam on the other hand binge drinks and drives home after a fight, involving himself in a fatal car accident, where a friend of Lena is killed. Lena's and Adams' life are forever changed after this, but their substances of choice bring different consequences.

Vollrausch is a film that gives an insight into the German legal system, in the German society and its relation with drugs.

Our goal is to mainly compare how the German government handles different types of drugs, including alcohol.

Films about young adults involving themselves with drugs are not uncommon, but they often focus on heavy drugs like heroin and cocaine, and talk about a world that society attributes usually to criminals and pariahs. We hope, among other things, to spark a discussion about drugs that hasn't been seen that often in films before, removing this "bad" filter: the judgmental lenses of the press or law.

This film is aimed at anyone who likes Drama films; it is however especially meant for those who are not aware of the problems that the War on Drugs causes, *and for all of those who wouldn't have a discussion about this topic by themselves.

This means, this film is not only meant as a critique, but as information, as an eye opener. We want to raise awareness about the topic without judgement and without presenting pre-chewed answers to the viewer, encouraging you to form your own opinion and bring them into discussion.

You would be supporting an independent, international student group from Germany, Brazil and the USA with a pretty daring film idea. Talking about such tabu themes like drugs comes with its challenges and a lot of criticism. This however does not hold us back from telling a story we consider important, a story about topics that keep us awake at night.

VOLLRAUSCH may be playing in Germany but is also of international relevance, as the problems that the war on drugs causes are universal. "[The War on Drugs] led to mass incarceration in the US; to corruption, political destabilization, and violence in Latin America, Asia, and Africa; to systemic human rights abuses across the world." Source: Kurzgesagt, 2016

Within this topic, we talk about the problem of alcohol, which has the potential to be just as devastating as other illegal drugs. However, our society and law treats drugs in differently and inappropriate ways. While some of them are not tolerated and severely punished, such as cannabis and party drugs, alcohol and cigarettes are widely accepted and portrayed as something very common.

Supporting us means supporting a film about injustice, racial profiling and a new view on our drug policy.

With successful funding, we will be able to realize the film the way we have always imagine it.

Our crew and cast members (except for the two protagonist) are working in this project completely voluntary, which means that all funding flows only and directly into the production of VOLLRAUSCH.

Your contribution will be used to finance everything from preparation until after our shooting period, as for example: catering for cast and crew, travel expenses, locations rent, set design and equipment, including storage media. The money is also intended to cover film festival submission fees - so that the message of the film can be shared to as many people and places as possible.

A motivated, young and international team of film students from the Darmstadt University of Applied Sciences, graduates of other film universities, and volunteers, who want to create a well made and critical short film. 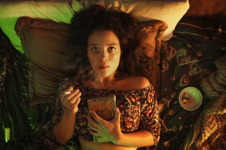