The interactive book for the new Anne Frank exhibition in Frankfurt tells stories about escape and resistance: Anne Frank is world-famous. Less known are Anne’s family members and friends who were too hiding in the annex and the people who helped them. The media installation planned for the Anne Frank educational center uses images, video materials and texts to inform visitors on these people who are not as famous as Anne in a more interactive way.

The interactive book – this is how it works!

The interactive book that will be used in the new Anne Frank exhibition in Frankfurt am Main makes history touchable: one can touch the pages virtually. In this way, the analog world and the digital world come together. Because the interactive book is meant to be used intuitively, it speaks to both younger and older generations. By looking at animations and playing around with the pages, readers can indulge themselves in the world of Anne Frank.

The interactive book – brings the past into the present!

The animated book tells the stories of all people that hid in the Amsterdam annex together with Anne Frank, and it tells the stories of their helpers and friends. In this way it makes persecution and resistance under National Socialism livelier and more visible: How did the people in hiding feel during their time in the annex? Why did Anne Frank become a worldwide symbol – and why not her sister Margot? Who betrayed the Frank family? What happened to the helpers after the hiding place was discovered? Furthermore, the book inspires us to think about current issues: What does civil courage mean in our society? Where do we need bravery today? Are we as solidary as we think we are?

The interactive book – and its location

The Anne Frank exhibition and its animated book is suitable for everyone who wants to learn more about the fate of Anne Frank, National Socialism, the Holocaust, World War II and remembrance. Age does not matter.
At the same time it is clear that young people will most likely become enthusiastic when they discover the possibilities of an innovative media installation – something that will not happen when they encounter a chronology. Furthermore, the history of Anne Frank connects different generations and inspires and encourages both teenagers and adults. By using the animated book, we want to enable people to not only learn about Anne Frank, her family and friends and the helpers, but to start wondering about its links with the present.

Everyone who supports „Anne Frank – a book for today“ will contribute in our efforts to let Anne Frank’s message – which is the wish for a world without hate and discrimination – live on.
When you support us, you enable the creation of an amazing media installation which invites people to both inform themselves on National Socialism and the Holocaust and wonder about current issues.

When you support us, you contribute to the empowerment of young people.

When you support us, you express the importance of Anne Frank in Frankfurt.

When you support us, you enable us to ask questions that are not asked frequently.

When you support us, you enable us to tell the ‘stories behind the story’.

For the successful creation of an innovative and informative exhibition, we need creativity and modern media. What we already have: creativity. What we still need: modern media. That is why we want you to support the animated book! The money we will collect on Startnext will only make up one third of the costs. The other two third will be paid by the Bundesministerium für Familie, Senioren, Frauen und Jugend (Ministry of Family) as part of the project „Demokratie leben“ . Our concept has already convinced the jury of Kulturmut, the crowdfunding initiative of the Aventis Foundation. What we need now is your support, so we can start realizing “Anne Frank – a book for today”.

The Anne Frank educational center is an organization which has been striving towards Anne’s wish to create a world without hate and prejudice for over twenty years now. The most important elements of our work are human rights education and the creation of understanding between people who have different origins, social status and ways of living.

We offer materials for everyone: Our team gives advice in case of racism, anti-Semitism and discrimination. We developed various workshops for teenagers, school kids and young adults; while our team consists of young people, we are able to bring the information forward in a way that is appealing for our target groups. Teachers can book our courses and workshops. Next to our permanent exhibition on Anne Frank, we show temporary exhibitions that deal with issues that arise in the migration society. We also developed a mobile learning lab which aims to teach teenagers about racism, discrimination and human rights and how they can recognize it in their own environment. Regularly, we offer conversations with Holocaust survivors. We support the exchange and combination of theory and practice during conferences. Furthermore, we offer events such as lectures and film screenings.

Our pedagogical offers are continuously evaluated by external parties, so that we can keep revising and developing our concepts. The Phineo Foundation has decorated us with the Wirkt Siegel, because we actively engage in initiatives against right-wing extremism.

The Anne Frank educational center has been funded through a cooperation and support from its members – two of these members are Mayor Peter Feldmann and Holocaust survivor Trude Simonsohn. 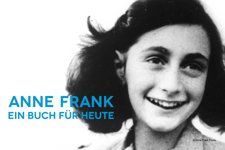