For six months we filmed three grassroots initiatives in the Netherlands, Germany and France. We also documented activities and protests at the world climate summit COP 21 in Paris. The result was over 60 hours of material that will be used to put together a feature length film. We believe the film could be a powerful tool to inspire people in joining the growing climate justice movement. We hope to finish the film and publish a German version by August 2016 and subtitled versions shortly after.

The year 2015 was marked by human induced climate change increasingly spiraling out of control - and the struggle for climate justice taking place at ever more fronts. In Paris a global climate agreement was adopted. But was it really about saving the planet? While negotiations and greenhouse gas emissions are in full swing, there are worlds between what would be needed to avert runaway climate chaos and the measures actually being taken.

This film portrays three initiatives before and during the World Climate Summit. It shows 1,300 people entering a lignite open cast mine and putting their bodies in the way of giant coal excavators in order to paralyze Europe's largest source of CO2 for one day (Ende Gelände). We hear the voices of people that block the import of fossil fuels at the harbor of Amsterdam (Climate camp „ground control“ & „Climate Games“). We meet people on a 5,000 km bicycle ride to Paris, providing on their way a common voice for a climate just world to countless local initiatives (Alternatiba).

The film also documents how tens of thousands take the streets of Paris during the World Climate Summit despite the proclaimed state of emergency. Meanwhile the largest climate change mobilization recorded in recent history unites more than 785,000 people in 2,200 events in 175 countries .
In the midst of giant machines, raised voices and apocalyptic landscapes, the logic of a system based on endless growth and its “green” crisis management is questioned.

Beyond the red lines is the story of a growing movement that says "Enough! Here and no further!” and commits civil disobedience taking the transition towards a climate just society into its own hands.

We believe this film will be a good tool to inform and inspire people to join the currently growing climate justice movement.
We want to reach a wide audience with the film.

The film will be subtitled in several languages (among others English, German, French, Spanish), so it can be spread around the global network of the climate justice movement.

The film will be published under a creative commons license (by-nc-nd) http://creativecommons.org/licenses/by-nc-nd/4.0/
and can be viewed for free online on our independent platform www.cinerebelde.org

There will also be pay and download possibilities in HD quality.

The film does not contain copyrighted music. It can be used in educational work.

„Social movements have to leave traces and documents of their passion for their visions to remain alive as memories for future generations.“
((i)) the film

inspiration
Social movements communicate through their actions and have the will tackle seemingly established structures. The wealth of ideas used for that aim; the desire for actions that go beyond the scope permitted by the law; the connectedness of the characters resulting from collective transgression - these are all elements that are transported in the film. We hope it will reach out to many people and will inspire them to become active for a climate just world in some way or another.

visibility
The press coverage of the mobilization and actions we filmed was very different. Ende Gelände or Alternatiba made it into national mainstream media, but had very little visibility beyond their national borders. Given the scope and significance of the international protests around the COP21 in Paris, the media coverage turned out to be shockingly weak.

Many people in Europe and throughout the world haven't heard much about these actions, the protagonists and their political motivations. Our film will help to fill this gap and create an own documentation of history.

Through our editorial work, we hope to provide a voice to those who never make it into the mainstream media. We hope to inform more about the background and context of a global climate justice movement.

transition and system change
The stronger the movement, the more political pressure. We hope the film will contribute to a just transition and transformation of society. Phasing out the use of fossil fuels is no longer a utopia, but a matter of time.

We invested many hours of volunteer work in the shooting and production of the film. The shooting is completed. The costs were covered mainly by donations and own resources of our media collective.

In order to successfully finish the film, we need to view and sort around 60 hours of footage.

Interviews must be transcribed. A good script needs to be written. The editing will take up most of the effort. At the end of sound and image need to be revised. Subtitles in multiple languages ​​must be created. Many of these steps go beyond the scope of volunteer work. That is why we want to take professional help and can pay appropriate allowances.

If we raise 3.500 euros, we can finish the film. If we get some more money, we will use it to improve the quality of the film. A professional sound and color grading would be great.

If we have additional financial resources we can also make more translations and subtitles of the film.

You are also supporting the infrastructure of our media collective, so new film productions can happen in the future.

Cine rebelde is an independent media collective that has been producing clips, short films and documentaries about environmental and social movements for twelve years.

We produce films or work on translations of existing productions in cooperation with like-minded film-makers and media collectives.

Our approach is 'advocacy journalism'. We deliberately document from the perspective of social struggles. We want to provide an insight into the political movement, apart from the usual formats of the established mass media. We see ourselves as an active part of what is happening and want to provide a voice those that hrdy ever appear in the mainstream media.

The aim is to portray the movements perspective on conflicts, the utopia and visions of a better world, and make it available to a broader public. Our documentaries are about writing history ourselves rather than letting history being told by the powerful.

We cover topics such as migration, social injustice, anti-nuclear, climate justice, genetic engineering, community supported agriculture, struggles for self determination, counter-summit protests, protests in other continents, etc., which are both locally and globally relevant.

Our films can be freely copied and are generally available online. We appreciate people that take initiative to organize non-commercial and other screenings. 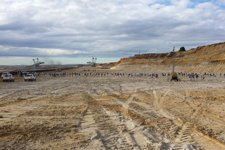