GREEN DEAL is a strategic board game for 3-5 players. Lead an international corporation in 2050! Try to predict the moves of your competitors and develop your own corporate strategy to win against the tough competition in GREEN DEAL!

How would you manage an international corporation in 2050? Manipulate the other players' decisions and find out how your corporation can be successful! Outpace your opponents with smart investments in sustainability projects and PR campaigns.

You should always keep an eye on your finances. Only with enough cash at hand can you invest in interesting projects or pay dividends to your shareholders. Forge alliances and increase your income by cooperating or sue your competitors for some fresh cash. Can you meet your short-term needs and still follow your long-term goals?

Video-Review by Hunter&Cron:
https://www.youtube.com/watch?v=H48lpuflz9I
(Audio is in German but you can switch on English subtitles!)

Objective
The player with most victory points wins the game. In 10 rounds players invest in project and action cards, in PR campaigns and pay dividends to their shareholders.

Additional victory points are awarded to all players for their respective weakest sustainability category, to the players with the best reputation in the PR assessment, and for the most profitable company in the company evaluation assessment.

This is what other players think about GREEN DEAL:
http://boardgamegeek.com/boardgame/153870/green-deal

This first edition is available here at an exclusive price of up to 11 EUR (30%) below the future price of 39 EUR!

The main target group of GREEN DEAL are board game players that love strategy games:

Sponsors
Your company likes the idea of GREEN DEAL? Well then it should become a sponsor! Check out our Sponsor reward for 2000 EUR.

Fun
In GREEN DEAL it is up to you how to lead your corporation of the future. Take a look behind the scenes and understand the strategic decision-making in corporations. Would you rather donate to charity and environmental projects or invest in PR campaigns to achieve a green image? Or are you all about profit? It is also important to accurately assess your opponents: will they cooperate or play competitively?

Interaction and Replayability
Despite not being too complex for casual gamers, GREEN DEAL still has a high replayability for strategy gamers. There is no single strategy to win. It is astonishing to see the many different strategies that lead to players winning. It is often surprising how close players score despite their very different strategies. This is due to the high interaction and interwoven mechanisms, the variety of balanced possibilities and the different action cards that make each game unique. Only those who are able to perfectly adjust their strategy to the actions of their opponents can win in GREEN DEAL.

Moderate playing time
Despite the strategic depth the playing time is only about 90 minutes. So there is no need to schedule the whole weekend for a game session :)

Balanced cards and mechanisms
GREEN DEAL has been developed and improved for about 3 years in more than 400 game sessions. More than 500 playtesters have played GREEN DEAL and their creative ideas and valuable feedback helped to balance the game that well. Several experienced and established game designers like Bernd Eisenstein, Hartmut Kommerell, Peer Sylvester, Christwart Conrad and Till Meyer contributed to the development with their feedback.

Why should you get GREEN DEAL rather now than later?

Money-Back Guarantee
If you decide you don’t like GREEN DEAL within 1 month of receiving it, you can return it for a full pledge refund, no questions asked. You only have to cover the return shipping costs. This is an exclusive offer to you early backers on Startnext.

Early Backer Discount
Your copy of GREEN DEAL comes at about 30% discount off the later price (at least 39 EUR) as an appreciation of your early support.

So basically you are not risking anything by ordering your copy of GREEN DEAL now. You can even buy GREEN DEAL in bulk and resell it at a profit.

We also offer you to test the game for free during the campaign: http://karma-games.com/dates/

We will use the money for the production of the board game. The minimum order at producers is 1,000 game copies.

Since the game mechanics are fully tested and the illustrations will be done before the end of the campaign, we can place the order shortly after the campaign. The production takes about 8 weeks so you can receive your copy of GREEN DEAL in October - the latest - hopefully already in September!

GREEN DEAL has a lot of game components:

We offer you a product of premium quality! We hired a talented illustrator to create outstanding visuals. She will create more than 100 illustrations, so each card is unique. Furthermore, GREEN DEAL comes with high-quality wooden markers instead of plastic ones and we produce our games in Europe.

Shipping
Shipping is free within Germany. Please increase your pledge by the respective additional costs in case of delivery to EU and worldwide!

Although producing a limited number of board games is very expensive, we offer you GREEN DEAL at an affordable price that is about 30% lower of the future price of 39 EUR.

Juma, the Geek
Juma Al-JouJou is the creative developer of the game GREEN DEAL. He holds academic degrees in philosophy, economics, Innovation Management & Entrepreneurship and business administration. Juma has played hundreds of board games, especially strategy games. He spreads his expertise in various game reviews (more or less eloquently): http://karma-games.com/game-reviews/

Sebastian, the Man for Finances
Sebastian, who also loves strategy games, is an expert in finances. He has worked in financial consulting for many years, holds a finance degree and traveled half of the world. Sebastian makes sure that you will receive your games as soon as possible.

KARMA GAMES
Together we founded Karma Games (www.karma-games.com) because we love developing games that give people a new perspective of the world. We already received a scholarship by the Ministry of Economics and the European Social Funds. This scholarship allows us to prepare the campaign thoroughly and hire a talented designer. Game publishers were interested in publishing GREEN DEAL. Since we received the scholarship for our vision we want to remain independent of big publishers though and launch it on our own. However, for the production of the first edition of GREEN DEAL we need your support now!

GREEN DEAL Review
A user on Boardgamegeek wrote a detailed review about GREEN DEAL: „I have no complaints to make - I just loved the game“
http://boardgamegeek.com/thread/1158932/what-i-would-have-wanted-power-grid-to-be-like-rev

Rules
Here you find the rules of GREEN DEAL in English and German: http://karma-games.com/regeln/
(not formatted by our designer yet, though) 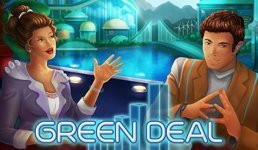