The documentary "Hadi Tschüss" portrays Münnevver, Ruhan, Derya, Emine und Necip. Although all five of them have spent most of their life time in Germany, they decided to return to Turkey - the country of their birth and the home country of their parents. "Hadi Tschüss" is a film about people whose heart is torn between the two countries - German virtues, Turkish warmth and the chance to get the best out of both cultures.

It has been half a century now that Germany called for guest workers from Turkey. Debates about integration of immigrants and their descendants or its alleged rejection dominated the media for a long time. Today immigration statistics are retrograde. In 2012 around 30.000 people with Turkish origin left the country. What motivates them to migrate (again) in different phases of their life? How do they perceive life in Turkey compared to Germany? What do they expect?
"Hadi Tschüss" is a film about people whose heart is torn between the two countries - German virtues, Turkish warmth and the chance to get the best out of both cultures. Apart from the German integration debate Münnever, Ruhan, Emine, Derya and Necip talk in “Hadi Tschüss” about their personal border crossings between Germany and Turkey.

While a range of media reported during the last months about the supposed mass emigration of high-qualified Germans with Turkish roots, in Turkey predominates the image of the conservative immigrants. Information and deeper insights into Turkish-German living are lacking. The documentary is intended to help counteract clichés and to break with stereotypes. By presenting the film and discussing it at different places in Germany and Turkey in autumn 2014 should help to encourage a mutual dialog.

1) You want to help us telling the stories of Münevver, Ruhan, Derya, Emine and Necip and support the production of a documentary on a topic which has not been dealt with yet.

2) You are interested in the topic of migration and integration and want to support an alternative to biased representations of this topic. Hadi Tschüss does not want to categorize or label anybody, but rather give a voice to the people and let them talk about their personal experiences.

3) You are a sympathizer to the young and aspiring film team who really feels attached to the topic and you want to help them to a successful film premiere.

4) You feel yourself closely connected to Turkey and Germany and you want to know more about the experiences of other border crossers.

5) You always wanted to remain seated in a cinema after the end of the film to read your name or the name of your company in the closing credits.

6) You are looking for an excuse to spend some days in Izmir - the most beautiful metropolis on the Mediterranean coast.

The shooting in Turkey has been completed in December 2013. A second phase of the shoot will take place in March 2014 in Ingolstadt, former home town of Ruhan who is one of the protagonists.
Financed by own resources and the support of the “Freundinnen und Freunde der Heinrich-Böll-Stiftung” half of the costs have been covered. With the support of the Goethe-Institut Izmir a cinema tour is planned in fall 2014 across Turkey.
Now we need your support to finance a professional postprocessing (cut, color correction, subtitling, music) as well as the production of a DVD. In this way the documentary can be made accessible for a wider audience. If the project will be overfunded the funds will be used to organize a cinema tour in Germany.

Anne Denkinger [assistant director/ production/ translation]
born in 1988 in Vogtland, studies International Migration and Intercultural Relations at the University Osnabrück with an emphasis on integration policy, asylum and migration between Germany and Turkey 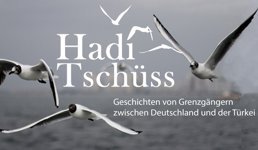