Crowdfunding finished
A trip to the history of jazz. „Stories from the Lighthouse“ is a documentary about the legendary jazz pianist Kirk Lightsey, who turned 80 this year.

The legendary pianist Kirk Lightsey who played with many great musicians turned 80 this year. He was the Motown-Studios pianist in his early years in Detroit and worked with musicians like Bobby Hutcherson, Pharoah Sanders, Dexter Gordon, Chet Baker, Arthur Blythe and Yusef Lateef.
In this documentary „Stories from the Lighthouse“ Kirk Lightsey with his nickname „Lighthouse“ will tell us stories from his life. A piece of history of jazz from over 60 years, with a lot of humour as well.
Some of Kirk's musician friends will also be interviewed.
I want to make a personal film due to our recording of two CD's and our friendship of over 30 years. I will be more like chatting with him than a traditonal documentary.

The aim with this documentary is to immerse into the history of jazz through Kirk Lightsey's stories and his musical experiences.
The largest group is jazz fans, jazz musicians, Kirk Lightsey fans and those who want to know more about black musicians in die USA especially in the 50s and the 60s.
I want to show the film at jazz and film festivals.

Most of the documentaries about jazz musicians are made posthum. That's why they are made with old interviews and old performances. I want the audience experience Kirk Lightsey live as a private person and as a musician on stage.
I think, every jazz fan or jazz musician is interested in as many stories about jazz as possible. This documentary can definitely contribute to this interest.

With successful funding of 60.000 Euro the money will be spent for the production of the documentary, such as hiring of professional equipment, camera and soundman, Trips to Paris for the interviews with Kirk Lightsey and his musician friends, video, photo and music rights, postproduction.
In case of target funding of 100.000 Euro we will also travel to Detroit and New York for research. 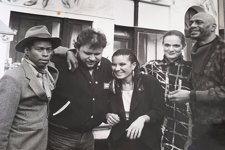 STORIES FROM THE LIGHTHOUSE
www.startnext.com