TAOF (TheArtOfFusion) is a project based in Frankfurt / Germany. The last album (Rhizomism) was produced in the year 2009. Many things have happened since then: more than 30 new songs than have been played during our live concerts and always with the same questions from the audience. Where are these great songs? When are you going to make the next album? Now it is time to make this real. Together we can make this happen!

TheArtOfFusion is dedicated, as its name suggests, to the fusion of different cultures, styles and above all art forms. The project was founded in 2006 by Rafael Sotomayor with the notion to create music that is popular but also conveying values such as tolerance, peacefulness, friendship, family, belonging and cohesion. The claim to be "popular" goes back to the basic idea of Pop music: Originally Pop music derives from Afro-American sub- and youth culture which is characterized in particular by a mix of cultures. TheArtOfFusion aims to address young people with these premises and their music without being exclusive: There are no limits in terms of age, origin, social status etc. for TheArtOfFusion's music. The project's goal consists precisely in reaching a wide and varied audience in accordance to its roots lying in the multicultural city of Frankfurt am Main to represent socio-cultural diversity. To meet this ideal, Rafael Sotomayor - the project's head and worldwide known Hang Master - invites musicians and artists from around the world to attend the project and to contribute their creative ideas, styles, sounds and concepts.

Since its foundation TheArtOfFusion has cooperated with musicians and artists from about 60 countries, thereby created an incredible range of musical mixes of styles and blended art forms, brought to many of this world's stages.
2009, the project has published its first CD titled "Rhiszomism". The idea to produce a music album with a rhizome structure was chosen for the rhizome's characteristics of diversity in its subtle ramifications and its ability to trace this heterogeneity back to an original root. This rhizomic structure is significant for the music of TheArtOfFusion.
"Art is a mirror of society." is the artistic credo of TheArtOfFusion. For artists it should not only be at stake to represent society as such but also to obtain a certain responsibility for the content in order to shape it in its values.

Since the release of the first and last album, a total of 30 new songs have arisen out of TheArtOfFusion's creative cooperation. Now these are to be released on two albums. The first album is titled "Universe" and follows the concept of the diversity of its predecessor "Rhizomism". The novelty lies in the musical concept: While "Rhizomism" was designed exclusively classical-instrumental, the new pieces hold an increased use of electronic elements which are annexed to the harmonious sounds of classical instruments. Thanks to this amplification of the musical variations, experimental sound pieces have emerged, telling wordless stories about current social issues, but also timeless "universal" themes like love, travel, home, wanderlust and growing up.
The second album will be entitled "The Bow". It alludes to the form of a rainbow, whose beginning and end can not be seen, but whose existence and form is perceived immediately. The title gives a lecture that an arc is a part of a circle, which means part of something infinitem and yet refers to something complete, perfect in form and cyclical. Likewise, it is in the lyrics of the songs on "The Bow" to shared experiences and cyclical images of the human condition.

Now the time has come to bring these new songs to the people! Therefore TheArtOfFusion wants to bring out their new works in the year 2015 on two CDs. For this your help is needed!
For your support you have the possibility to get different merchandise articles, CDs or even more: a privat concert, music lessons, workshops and even a handmade Hand Pan from Rafael himself as a thank you.
TheArtOfFusion consists of professional artists who consider their passion of making music as a vocation. If music is a mirror of society, then music characterizes the people in a society. So it is in your hands, what you want to hear and how the music that you listen to influence the people of your environment. Help us with funding a great musical project, chip in and support freelance artists in their success!

The goal is to raise money to produce 2 new albums. This project is for the band TheArtOfFusion and the TAOF Records label.

During the last six years this project has been playing many gigs around the world. But this doesn't mean that we have been economically successful in a way that we could afford all the expenses related to the production of a high quality album, or in this case two albums. The feedback we have received from our fans and from those who invited us to play at different venues during the last years has been very positive. This is the reason why we think that it is worth taking the risk. We truly believe that our new songs have the power to bring people together and to touch their souls.

Second priority
- Videos of some of the songs
- New websites 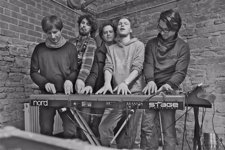