Crowdfunding finished
Sexual exploitation of agricultural workers is a big problem on fruit and vegetable plantages in Italy and other Mediterranean countries. The goods that are harvested on these fields end up in German and European supermarkets. We want to know: What do German and European companies know about the situation in the fields of their suppliers?

This investigation deals with the situation of female workers in Italy and other Mediterranean countries. Despite an increase of female labour in the sector of agriculture in these countries they are paid less than men, are sexually harassed, coerced and raped in the greenhouses and fields, where vegetables and fruits are grown to be exported to Germany and all over Europe. They harvest a considerate amount of the fruit and vegetables that ends up on your supermarket shelf.

Workers from Romania, Nigeria, Bulgaria, Syria, Morocco, but also native, are asked for sex in order to keep their jobs. They are so dependent on the salary, that they rarely report these crimes to local law enforcement, or seek out other help.

As a result of the economic crisis, of the spreading of precarious employment contracts and the increasing numbers of migrants among the workforce, the problem of sexual harassment, blackmail and violence against female workers in farming has been getting worse. They make up between 40% and 70% of the agricultural workforce in the countries included in our project, a percentage that has steadily risen over the past 10 years.

International media has covered the exploitative conditions endured by immigrant workers in Mediterranean fields and greenhouses, but gender-focused stories are lacking almost entirely.

Besides reporting on the situation of women in the fields, we want to research the supply chains from these fields to European (and especially German) retailers and supermarkets to find out what German and European food companies know and do about these violations.

We want to bring transparency about the conditions of harvesting to the consumer of these fruit and vegetables. Additionally, we want to understand what food companies know and do about this matter.

So far no cross-border investigations has focused on these labor and human rights violations against female workers in agriculture. We want to change that.

We want to find out:

We want to publish our results not only in Germany (f.ex. on CORRECT!V), but also international (f.ex. Italy). The outcome will be available in many different formats, such as radio, text and video pieces.

Through the lawsuit of Pakistani workers against the German textile producer KiK, the public started to discuss what responsibility German companies carry for the safety of workers of their suppliers. This can also be attributed to the sexual exploitation and blackmail of farmers in the Mediterranean agriculture, as Spain and Italy are the most important delivery countries for Germany.

Together, Germany imports 700 million tonnes of fresh fruit from both countries. Morocco is the largest fruit and vegetable producer in Africa and was Partnerland at the Green Week in Berlin this year.

Our investigations aims at making consumers aware about the risks female workers are exposed to, in the very fields their fruits and vegetables are coming from.

With the collected money we want to finance our travel, translation and accommodation costs in Italy and other Mediterranean countries. We will use a small amount to finance the research of supply chains before and after our field trips.

Stefania Prandi is a journalist and photographer, who has covered gender, social and environmental topics, as well as foreign affairs. She has reported from Ethiopia, Albania, India, Greece, Portugal and Italy, for both national and international publications such as Al Jazeera, Vice, El País, Open Society Foundations, the Swiss magazine Azione, Pagina99, Elle Italy, Elle Hungary, Vanity Fair, Rolling Stone, Il Corriere del Ticino, Il Fatto Quotidiano.it. For the photojournalist project “The Other Half of The Farmland” (among the best articles of the 2016 for VICE news Italia), about the coercion, blackmail and rape of female workers in Italian greenhouses, she won The Pollination Project Grant, received honorable mentions by Moscow International Photo Awards, International Photography Awards, Neutral Density Awards, Photogrvphy Festival, Tokyo International Photo Awards, and was named as one of the finalists for the LuganoPhotoDays Festival 2016. Her project “The Consequences”, about "femicides" in Italy, received Bronze Star Award by ND Awards (Neutral Density Awards) and was a finalist at Shoot The Face. Stefania wrote and directed the documentary Uranium Project, produced with Lab 80 film, which was screened at festivals such as Cinemambiente, the Milano Film Festival and Bergamo Film Meeting. From 2011 until 2014 she studied gender issues in Sweden, Norway and United States.

Pascale Müller is a multimedia reporter currently based in Berlin. Over the past three years she has been covering human interest stories, mostly from Jordan and Germany. Her work has been published among others in Der Spiegel, Tagesspiegel, Syria Deeply and Middle East Eye. With her team she was nominated for the German Feature Award 2015 in the category “Beste Webreportage” for a multimedia feature from Ivory Coast. Pascale has journalistic work experience in Iraq, Ivory Coast, Jordan, Tunisia, Morocco and Vietnam. She studied at the Danish Journalism School and graduated from Zeitenspiegel Reportageschule Günter Dahl. 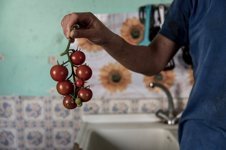