Crowdfunding finished
Our newspaper "Dangerous Object: Eisenbahnstraße" is a documentary and side-taking investigation of the situation in the area around Eisenbahnstraße in the east of Leipzig, where a weapons ban zone was introduced in 2018. Currently, we want to publish a 2nd edition of the newspaper, since important voices from the neighbourhood and certain aspects in the discourse are still missing. The new issue will again be for free and thus accessible to all, independent of income.

Since November 2018, the situation in the area around Eisenbahnstraße in the east of Leipzig has "finally been defused" – according to the BILD newspaper. This is where the first weapons ban zone in Saxony was established. Even before this, the police were allowed to carry out random controls in this "dangerous place". Prohibition signs have now been erected around the area and there is a fine of up to 10.000€ for carrying weapons, as well as up to 1.000€ for carrying "dangerous objects".

But the Eisenbahnstraße is also a dangerous object for any journalistic, documentary, artistic investigation. It seems impossible to take and show pictures with an unbiased view. The images are too much cemented in our minds, since Eisenbahnstraße has been in the headlines for years as a result of brawls, shootings, drug trafficking, knife attacks. Often, these acts are diffusely attributed to non-German or People of Colour.

In August 2019, we published the photo newspaper "Dangerous Object: Eisenbahnstraße", in which we counter the stigma of "the worst street in Germany" (ProSieben) with a differentiated critical picture. For this purpose, we held long conversations with residents, used video stills from relevant TV documentaries and our own bodycam recordings and photographed special places in the neighbourhood with a large-format camera. Thereby, we want to complement the image of the neighbourhood and counter those media reports and portrayals by the police with voices from the neighbourhood.

Now we want to publish a second edition – with your help. It will include further conversations with residents: We want to ask if they feel safe in the neighbourhood, how the weapons ban zone affects their everyday life and what they would like to see in in general for the life together in the neighbourhood.
In the new issue, we particularly want to give priority to the links between so-called dangerous places and displacement. To this end, we will do more research on the experiences with such processes in other cities, bring them up in our conversations and use the large-format camera to shift our focus to those places where these links have already become apparent, such as on the last wastelands in the neighbourhood. We will also continue to use the body cam and social networks to search for images that shed light on these links.

We want to add a differentiated picture to the "single story" (Chimamanda Ngozi Adichie) of the Eisenbahnstraße. We want to counter the portrayals of certain media, political parties and the police with voices of the local residents and thus break with the stigma of the "dangerous place" that is attributed to the neighbourhood. We do not ignore the fact that there are real problems in the area - on the contrary - but we think that neither the weapons ban zone, nor the racist police controls nor the media bashing of the whole neighbourhood really contribute to solving the problem. Therefore, one of our aims is to achieve or at least initiate a change in thinking among those responsible.

We reach out to all those who are interested in a critical and differentiated press, in voices from the neighbourhood. This does not only concern residents of the adjacent residential areas of Eisenbahnstraße, but also all people who want to live in a freer Leipzig. This goes to all those who have problems with these kind of political measures, who meet the the police actions in the Schanzenviertel in Hamburg on G20, in the Hambacher Forst, in the Berlin "danger zones" at Görlitzer Park and Kottbusser Tor with suspicion, or who are interested in the perspectives of those whose everyday life takes place in such areas.

If you - like us - believe that for a proper assessment, every issue must be looked at from different perspectives, then you should support us in publishing even more voices from the neighbourhood.

If you - like us - think it is important to clearly contradict discriminatory portrayals and to spread diverse perspectives through our own media, you should enable us to distribute the second newspaper, too, at a free price.

If you - like us - like both editions of our newspaper to be translated, you should help us to achieve our 2nd funding target.

If you - like us - love to hold conversations, texts and photographs in your hands, printed and on newsprint, you should really get our newspapers for yourself, as a thank you for your support.

If you - like us - are enthusiastic about telling personal/political stories through photography and film, you should enlist our support for your own project or workshop for your group as a reward.

If we - with your help - reach the first funding goal, we can fully concentrate our work on the 2nd issue of our newspaper in March and April. We will do research and continue to meet people from the neighbourhood for discussions. We will transcribe conversations and turn them into readable texts. With your financial support, we will continue to use the large-format camera around neighbourhood, as well as the body cam and search the internet for suitable pictures. Finally, we will put the newspaper into layout and print in mid-April, so that we can publish the 2nd issue of "Dangerous Object: Eisenbahnstraße" in the beginning of May.

If we reach the second funding target, we can have the texts of the 1st and 2nd issue translated into Arabic and English and have them printed as an supplement. We can pay translators and delve into layouting without stress. This would bring us a huge step closer to our goal of making the newspapers accessible for as many communities as possible and it could thus contribute to an exchange across the neighbourhood and across language barriers.

Our approach at unofficial.pictures is telling private and political stories through photography and film. We want to bring about social and political change through new perspectives. For this purpose, we develop our own exhibitions, books, newspapers and films and empower other people to use these approaches for themselves and their issues. We want to create space for people and topics that are otherwise rarely discussed in the media. Workshops, exhibitions and books are intended to reach different milieus and encourage people to question and discuss their own views through new perspectives.

unofficial.pictures, that‘s Rafael Brix and Frieder Bickhardt. We both studied documentary photography and have been able to gain teaching experience in a wide variety of contexts. In 2016, with the rise of Pegida and the Leipzig offshoot Legida, we joined forces. Since then, we have organised workshops in which people with experiences of migration had the possibility to fight for their own perspective and rights through artistic means, e.g. Fahd Aldaya through the book and the accompanying exhibition "The Jasmine Flight". From May to July 2019, we worked on the 1st issue of the photo newspaper "Dangerous Object: Eisenbahnstraße". With the newspaper, we were part of a touring exhibition in public squares in 4 small Saxon towns (Döbeln, Weißwasser, Annaberg-Buchholz and Hoyerswerda) in summer 2019, under the title "Kein schöner ____ in dieser Zeit". 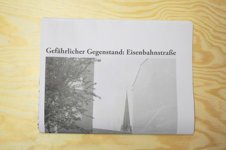