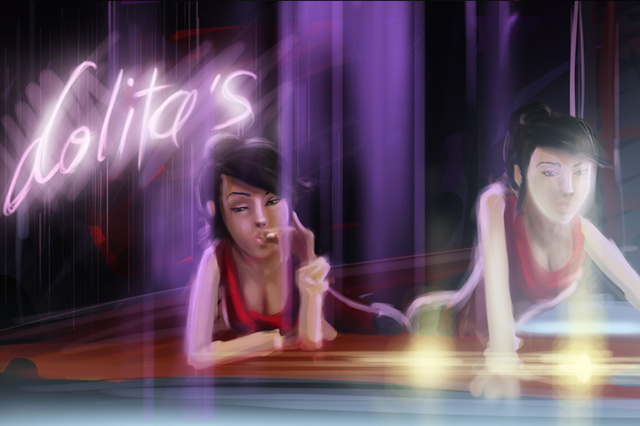 Our project description now in english! «Das Meer im Fernseher» is a short film about an American secret agent who assassinates the North Korean dictator Kim Jong-il, and suspects that the two owners of the Lolita's cafe, Doloress and Dollores, are attempting to take revenge on him for the assassination. North Korea is a unique place; it is both amusing and frightening, although mostly amusing. The young unpredictable dictator Kim Jong-un daily adorns covers of newspaper and magazines. Today he is threatening with nuclear bombs, and tomorrow he is inviting Dennis Rodman for tea. Him and his father Kim John-il are heroes of blogs and memes; they become Time magazine’s people of the year. North Korea is in vogue. Koreans are wary of an invasion by the United States, and the Americans are expecting a Korean nuclear strike any day. The film «Das Meer im Fernseher» is our attempt to reflect on this strange, twisted political game. The film doesn’t take place in our usual world; something cinema as a tool excels at portraying. This world is that of dark corridors, fluorescent lights, secret agents, threats of a nuclear apocalypse, and struggles against dictatorship. But first, we will begin with an emotional story of a man in a fight against paranoia. Synopsys Martin leads a quiet life. He spends most of the time video-chatting with Milena Sunday, the Internet's best relaxation expert. She is one of the few who knows that this calm man had lead a life of a secret agent whose last contract was to assassinate Kim Jong-il. Like most ex-agents, Martin suffers from paranoia, or so thinks Bill, Martin’s friend. Martin is certain he should remain vigilant no matter what, and so he does when Bill introduces him to the sisters Doloress and Dollores, two striking owners of the Lolita’s café. Martin begins suspecting they were sent from North Korea, and are probably trying to seek revenge for the murder of their dictator. Nevertheless, short of evidence, Martin chalks his doubts off to paranoia and embraces Bill’s advice to relax and enjoy his life. However, the sudden death of Bill changes everything. Target audience It doesn’t make sense to divide our audience into categories when the story has wide appeal. Our audience is anyone who loves great film, and our goal is similarly broad and non-discriminating: we would like to please our viewer with an entertaining, beautiful film full of both suspense and tongue-in-cheek humour. We would like to tell a story of a secluded life of a retired secret agent whose career achievements and medals cannot be revealed even to those he is close to; whose colleagues consider him paranoid; whose lunches at a local café are served by undercover communist agents; and whose only trustworthy conversation partner is an online psychiatrist. Why should you support us? When a comedian has to explicitly state he’s made a joke, his career is over. We think the same, so we don’t want to praise our story to the skies; you have already read the synopsis and made up your mind. To help you decide though, here are some of the benefits of helping us: First of all, you have an excellent opportunity to become a personal enemy of Kim Jong-un by participating in making a film about the murder of his father. That has to be somewhere in the vicinity of priceless. Secondly, you will have a chance to tell your friends proudly that this film was shot on your budget (and for 25 euro, you will be able to prove it with your own shiny DVD!). If that doesn’t awe your friends, find better ones. Thirdly, since you’ve read this far, you are clearly interested in our film. Isn’t that a reason alone to give us some money?!? Sorry, that was desperate. Back to the film, and most importantly: anyone donating 5 euro or more will receive an unforgettable chance to transform into their idol, Kim Jong-il, thanks to a photorealistic mask! How will the budget be spent? Even though some members of our team are Russian, 100% of the budget will be spent on making the film and not drinks. The greater budget we have, the more elaborate our sets will be. Better sets mean higher quality visuals. The same applies to equipment rentals, post-production, and costumes. Somebody once said that art demands sacrifices. In this case, our art depends on our and your sacrifices, which will allow us to make a beautiful film together. Crowdfunding is not the only source of our budget: aside from 3,000 which we’re hoping to raise with your help, we are also contributing as much as we can from our personal savings. 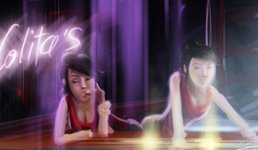