Crowdfunding beendet
GG&G is a short film about plastic pollution and wasted Gods! A cinematic allegory of our time. What is sacred? And can sacredness save us? Nature and man are in a war without winners. The Gods that man once created seem powerless.

This is the amount we will need to start filming. It covers: shooting and costume expenses, the actress' payment, travel expenses and catering for the crew

Plastic is everywhere: garbage dumps, roads, woods, it's all around us. Microplastic can be found in rivers, oceans and even in the clouds; it's been detected in the soil as well as in the human placenta. The anthropocene is here. Can humanity go against its own achievements without taking a step backwards in its living standards? How powerful are we really? And who will save us from ourselves? The depletion of our planet, the narcissistic short-sightedness of politics and the economy, the weakness and inability of all religious dogmas as well as science to secure the planet's future form the background of this film.
Are we God?
The nameless Goddess that roams this film is our own relationship with sacredness. It is free from dogmas and denominations. And yet powerless and oppressed. Our rationalistic approach to life has all kinds of irrational consequences. We have spread our activities like a virus, blindly following the logic of the spread and falling into the trap of delusion under the disguise of reason.

The film aims to raise awareness through aesthetic means. It illustrates human attitude towards nature. But the film also addresses our self-image. Our relationship to the material world as well as to the ideal. What do we think is essential for life? How much selfishness and greed is regarded as normal today?

The film speaks to all those who worry about the gradual destruction of our planet; and all those who, in today's reality, put a question mark behind solid convictions and beliefs.

With your support, you enable a number of artists to work in these difficult times. We are film professionals and professional artists who pursue our vocation with conviction. Help us continue. In addition, you support gender equality in the arts since the cast & crew is a group of female cinema professionals (our male screenwriter feels very comfortable with us, though!).

So far, all the preparatory work on the project has been based on the passion of all participants. The rehearsals, the script, the costume – everything so far is the result of unpaid work, because each of us provided their creativity out of conviction. When we reach the first stage of financing, this means that we can continue with filming. We can cover the costs of transport, support the crew during long days of shooting and offer at least a symbolic reward. The costume designer, cinematographer and actress are thus able to do their work on the project with less concern.

By accomplishing the second stage, post-production costs can be covered as well! This means that the sound designer and the musician, who are both involved in the soundtrack of our film, can be paid. In addition, necessary studio costs are incurred for sound design as well as for the festival’s usual film versions (DCP).

Aristoteles Chaitidis is an author and performer who lives in Berlin, Germany. He studied literature and philosophy at the Ludwig-Maximilian Universität in Munich, Germany. After years as an extra at the Deutsche Oper Berlin, he proceeded to realise theatre productions based on his own texts. On several occasions he contributed to the performance as both a performer and director. In addition he has been performing in the field of classical music as a counter-tenor. Goddess Garbage & Gewalt is an ongoing project that emerged from his last pre-lockdown theatrical production „Wenn Götter das dürfen*“, which was scheduled to be shown in early spring 2020 in Vienna. It’s the second collaboration with actress Christina Fronista and costume designer Maria Salouvardou. After the short film “stille amare”, this is also the second collaboration with cinematographer Alkistis Kafetzi.

Alkistis Kafetzi is a cinematographer and (film) editor who lives in Berlin, Germany. After finishing her studies on theater and film (National Kapodistrian University of Athens) she moved to Munich, Germany where she worked as a freelancer videographer. She has edited several short films and documentaries that were screened at European film festivals. She has been a steady collaborator of the Institute for Experimental Arts and the theater director Taso Sagri since 2011. In 2016 she directed her first short film, the documentary "Unterwegs". GG&G is the second collaboration with author Aristoteles Chaitidis

Christina Fronista was born in Athens. She had a German-Greek school education and finished her studies in Acting in Theatro Technis of Karolos Koun (Greek Art Theatre in Athens). Later she studied Musical in Berlin. Theatre performances followed in Athens, Berlin and Brandenburg in classical repertory. Her main artistic interest is the combination of theatre of the speech and musical theatre. In the Summer 2020 and in the frames of the exposition “Missing Nature” of the group Techne occurred the first collaboration with Aristoteles Chaitidis in which the monologue Goddess Garbage & Gewalt was presented as a study in Musical Theatre, work in progress and Improvisation.

Maria Salouvardou lives in Berlin and works as costume installation designer using as materials anything discarded: broken parts of instruments, toys, dolls, plastic, paper, fabrics, threads and wire. She restructures and composes with respect towards the environment. As a stylist, human hair was her first material for sculpture and installation. Apart from attaining a Business Management degree she studied -acting (Vasilis Diamantopoulos and Akis Davis Theatre Schools) - Costume design and Scenography (Little University School) -History of Art (Spanish Studio School) -History of B&W Photography (Photographic Circle). She participated as costume designer and actress in various shows and performances and lectured at the Little University on recyclable materials for making clothes. Her last performance was in Gallery II for the Landscape Metropolis exhibition with a costume made out of bin bags. She has already collaborated with Aristoteles Chaitidis and Christina Fronista, making the costume of the performance „Goddess, Garbage & Gewalt. One of her costume installations based on poems was recently presented at the Illuseum Berlin as part of the exhibition ‘Missing Nature’ organized by Techne e.V.. 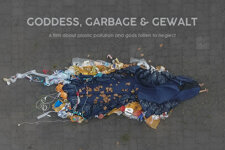