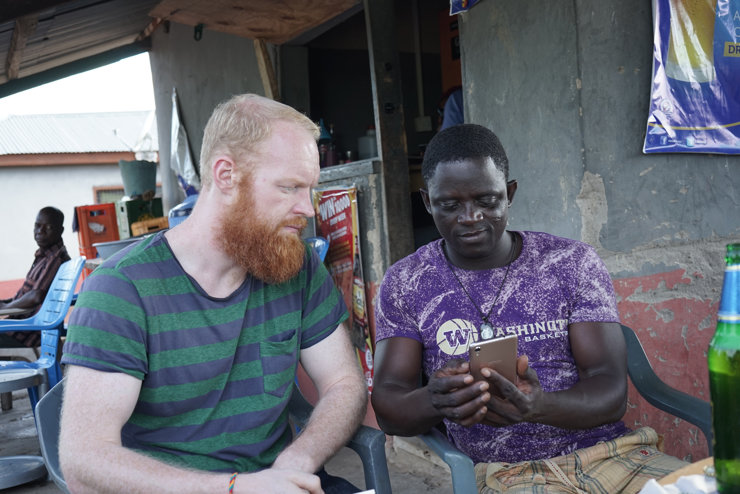 Nothing about us is the same: our countries, our culture, our careers, never mind the glaring visual contrast. You could categorise Isaac Birituro under ‘English Folktronica’ on Spotify as easily as you could confuse me or my music for being Ghanaian. But like they say: opposites attract.

The day we met, I’d never played with a balaphonist (though I’d recorded them) and Isaac, surprisingly, had never played with a guitarist – especially not one with an enormous ginger beard. But as soon as I heard those thumping, buzzing bass lines and he heard my percussive guitar playing intertwine, we knew this was something special.

It was clear to me that, though he played a traditional instrument in a traditional way, Isaac was influenced by the Western tinged music that filled the streets of Accra – in fact his father, Edmund introduced him with “He plays the modern way!” Partly dismissive, mostly proud. And though it jarred, the idea that this Viking who sat before him sounded like he had arrived in Ghana via Burkina Faso, there was no mistaking that I played the guitar too much like the stringed instruments of Mali for it to be just a coincidence.

And that’s what this album is; a combination of difference; a magnifying glass over the Venn diagram of our lives; the unfathomable meeting of parallel lines. It’s not my album, nor is it his album, nor is it our band’s. There are two distinct parts: Isaac and me; xylophone and guitar: Ghana and Great Britain. But because we have that one thing in common, that influence of music from afar, that desire to hear the usual done unusually… we fit.

The moment we sat down to listen to the first days recordings, we both could hear far more than had been picked up by those microphones. I could hear kit drums and strings and woodwind and he could hear gome drum and choruses and ngonis. And that is what’s next. That is what we have left to realise: our imaginations. We just need help to record our imaginations.