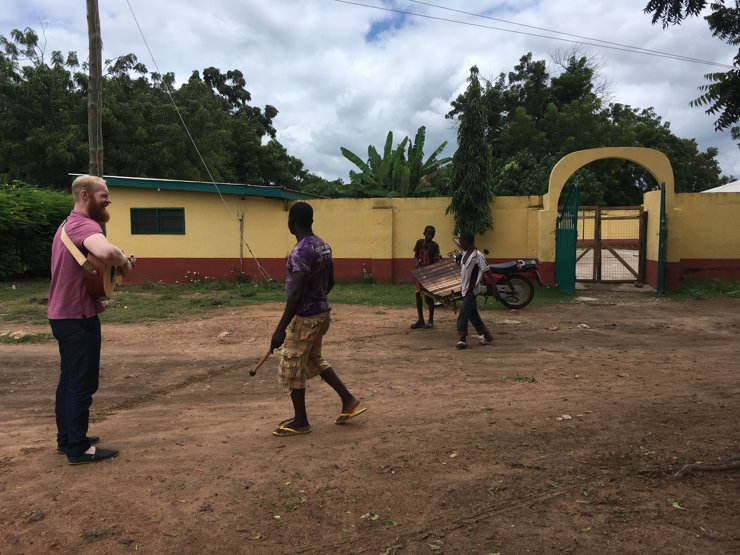 We were sitting beneath the corrugated tin roof veranda, clothes dampened by the unusually heavy rains, spirits dampened by the fact we’d spend three days waiting for musicians, for no one to turn up. Then, rushing through the gate using a xylophone as an umbrella, came our lifeline.
“Edmund!” Tim called, standing to perform the simple but deceptively difficult Ghanaian handshake. “Sonny, this is the xylophone player I told you about.” he said, surprised to see his old friend. “What are you doing here?”

Edmund, originally from Saru, a small village about 4 km from Kalba, now lived in Accra, building and selling xylophones with his son, Isaac. They had travelled up from the capital that day, to deliver a xylophone and pick up supplies found only in the North. Excited by the sight of this instrument I asked, “Do you play?”

As Isaac sat to play, hearing those familiar deep buzzing bass notes, I ran to grab my guitar. Amazingly, the open tuning I had recently taken to playing in was the same key as the xylophone. As we jammed, a crowd of school children gathered, peering through the gate. Tim could see the delight on my face at finding this extremely proficient musician and Isaac and his father were equally surprised at how well my guitar playing fitted Isaac’s ‘modern approach’ to the xylophone.

We played for easily an hour, just trading ideas and songs and riffs from each other, both of us enjoying it as much as the audience we’d gathered. In the back of my mind it seemed wrong to be playing this without capturing it, but with the power being cut off due to the unusually heavy storms – even during the rainy season – there was nothing I could do. Wanting to save the magic for recording and because Edmund had to delivery the xylophone, we stopped.
“Tomorrow at 10 then?” I asked.