Crowdfunding beendet
We are Karlijn Langendijk (NL) & Ladislav Pazdera (CZ) and Meraki is our upcoming duo album with acoustic guitar music. The word Meraki means doing something with a lot of love and putting a piece of yourself in your work. And that's exactly what composing music means to us both. We've been working together on these compositions for the last two years and we believe they are finally ready to be shared with all of you. Give them a listen, we hope you would like them.

This project is about connecting with our listeners directly and sharing some of our music that we have crafted with a lot of love and passion. Since this is a very intimate project and close to our hearts, we decided to go for crowdfunding instead of working with a record label. This way you can experience and listen to our most honest self and be a permanent part of Meraki.

With this project we hope to reach people who enjoy our music and connect with our work. If you are someone who enjoys nature and always finds patterns in everything that happens around, you will definitely enjoy our pieces from this album.

"Two of the finest young European guitar players." - Don Ross
"Every piece on the album tells a story." - Norbi Kovács
"I think this CD could make a difference." - Reentko

By supporting us, you will not only help us release our favourite album but you will also achieve a special place in our hearts. In return you can avail some meaningful and cool rewards.

And as for the music that you get, all the pieces are lively and rhythmical, allowing you to be part of the enthralling story we have created together.

If the crowdfunding campaign is successful, the money collected will be used for financing the production and promotion of the album.

Karlijn Langendijk was born in 1995 and grew up in Uitgeest, the Netherlands. Surrounded by acoustic guitar music since birth, she started playing the guitar at the age of thirteen inspired by her father. Her music is not just happy or sad - she composes all the intricate shades of emotions that people deeply feel but cannot communicate in words. As a guitarist and composer, she is intrigued by all kinds of different music genres and she combines them into a completely unique style. Apart from having toured in Europe, China, Japan and India, Karlijn has also shared the stage with musicians like Tommy Emmanuel and Peter Finger.

The young Czech guitar player Ladislav Pazdera displays his talent and charisma not only in his own compositions and arrangements, but also in his extensive repertoire based primarily on world music, fingerstyle and traditional guitar music. He delivers stirring and dynamic performances demonstrating a diverse blend of sound and style. Ladislav was born in 1989 in the city of Pardubice. He started to play the violin in his early childhood and at the age of 12, he started to play the acoustic guitar. In 2014, he moved to Dresden to study World, Concert and Jazz guitar music at the Hochschule für Musik Carl Maria von Weber. 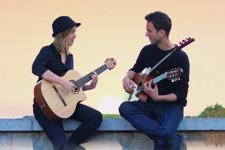