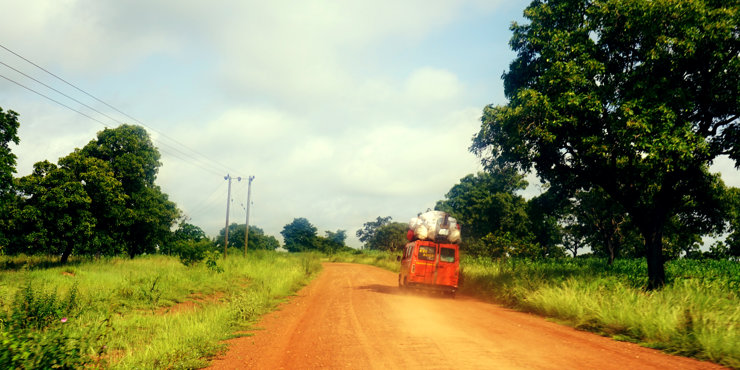 Driving the red dirt track from Tuna, there is nothing to signify that you’re close; no sign, no geographic feature. The landscape is quite flat and for as far as the eye can see between savannah trees and the odd mud-built, tin-roofed farmhouse. There’s no natural fortification, no visible quarry or mine and the nearest river, a kilometre back the way you came, is obviously not the centre of attraction for Kalba’s inhabitants.

In fact you’d be forgiven for believing it was one of it’s satellite villages along the route here, had it not been for the fact that the main road peters out to rough stony ground as the mud huts merge into concrete and sit closer and closer together. The road south to Saru is hidden among trees and the road north to Wa, the capital of Upper West Region, is, to the untrained eye, almost indistinguishable from the trodden tracks joining houses.

But as you start to orientate yourself, down passages, hopping from tree to shadow hiding from the mid-day sun, you begin to realise that unlike European settlements, built on geographic features or military strong holds, there is more to Kalba than meets the eye.

It is a centre. A centre for so many things. And at it’s centre, physically and metaphysically, and literally at the end of the road, lies the market. Held once every 5 days this hotchpotch of crooked tree-trunk-post stalls and bare patches covered with large brightly coloured cloths, is a visual noise as much as an aural one. People sell their wares, from old shoes, to herbal medicines, sitting cheek by jowl with butchers, cloth sellers and pito stands – the local beer – wherever they can find space. As you negotiate the narrow tracks between stalls, sellers gently and kindly encourage you to browse their goods, while others laugh and joke in the typical exuberant Ghanaian manner.

Then as the tracks open, and the laughter and noise, gets faint and the houses more distant from one another, you find yourself on the outskirts. Less busy but no less important, Kalba is encircled by what makes it what it is. To the East the Church, a large building in a serene part of town, a centre itself, for marriage and death but for also socialisation, community, celebration… and football. Southeast to the main crossroads, the schools with four schoolhouses for children from 4-16 and two large bare patches of earth which doubles as the local football team’s training ground. To the south the clinic and from there back round to the church, the farms, which provide for its people, cut by the roads which fan from its centre the satellite towns beyond.

What makes Kalba so important is not what you see on the surface. It’s the people and their lives. The Market they buy and sell at, while making a stop to the clinic on market day to save time. It’s a place of work, of play, of pain, of joy, of hope and of sorrow, of life and of death. It is everything you have ever known. And nothing you have ever experienced. That is Kalba.